For the ultimate list of foods that start with B, check out the lists I have compiled here. There are some foods on this list you will recognize but also some you may have never heard of before. But they are all foods or drinks starting with the letter “B”. After reviewing this list you will learn more about all sorts of yummy things. So the next time someone asks you what are some foods beginning with “B”, you will be able to list off many with no problem. (could come in handy for trivia nights or crossword puzzles?)

Yet, there are so many B foods to list. This post could never include them all but I have broken them down into several categories for you to find just what you are looking for. Continue reading to find out about common, unique, fruits, vegetables, and drinks, where all the foods begin with the letter “B”. By the time you finish reading this list, you will know all about so many foods that start with B How many have you tried, and do you have a favorite?

Recipes That Start With B

Instant Pot Steamed Whole Beets
For an easy recipe to steam whole beets, use an Instant Pot or electric pressure cooker. This recipe also yields the best way to remove the skin off of those whole cooked beets.
Check out this recipe

Broccoli Apple Salad with Greek Yogurt Dressing (no mayo)
This healthy broccoli salad with carrots, raisins, apples, and cheese is amazing. The creamy greek yogurt dressing is low-fat and made without mayo. It is tangy, crisp, fresh, and sweet in every bite. It holds up great for potlucks and barbecues. It is even great as a leftover, unlike other salads.
Check out this recipe

Common Foods That Start With B

Unique Foods That Start With B

Fruits & Vegetables That Start With B

Drinks that Start with B

Product Recommendations for this Article: 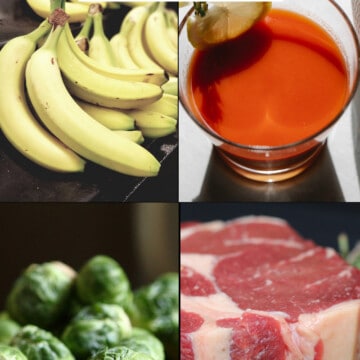 Food That Start With B

Angela
For the ultimate list of foods that start with B, check out the lists I have compiled here.  It includes recipes, foods, drinks, and more that all begin with the letter "B".
Print Recipe Pin Recipe
Prep Time 0 mins
Servings 1

Try any food or recipe, just a sample shared below but full details above

Hi, I'm Angela I’m Angela, a petite mom that loves to cook, eat and explore all things food. I have been cooking since I could pull up a stool to finally reach the counter. I still rely on my trusty stool every day. I am a former personal chef turned blogger that enjoys cooking with and for my family, traveling to try new cuisine, and constantly learning about food, drink, & how it touches all our lives.